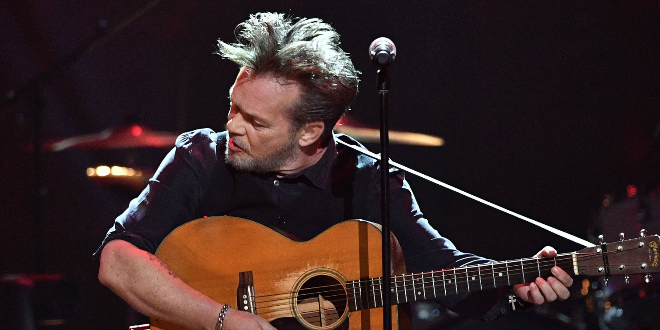 Check out the link of the presentation: https://www.indystar.com/videos/entertainment/music/2018/06/16/john-mellencamp-enters-songwriters-hall-fame/36089869/

Guthrie introduced Mellencamp, the no-nonsense yet good-timing rock star who outlasted comparisons to Bruce Springsteen and Bob Seger to establish a respected career.

“John has written hundreds of meaningful, insightful and powerful songs that ripple with feelings that we all know — songs that comprise one of the most singular and important bodies of work in music,” Guthrie said. “And tonight we recognize that John Mellencamp, persistently and even doggedly anchored to his own unique identity and his own unique talent, now holds his own among the great songwriters.”

According to AmericanSongwriter.com, Mellencamp told an anecdote about his late grandmother that typically accompanies his live renditions of “Longest Days.”

Nicknamed “Buddy” by his nearly 100-year-old grandmother, Mellencamp said he was surprised in his mid-40s when she prayed to God about the two of them being ready to come home. “I’m not ready, Grandma. Buddy has more sinnin’ he plans on doing,” Mellencamp recalled Thursday. She replied, “Buddy, you’re going to find out that life is short, even in its longest days.”

Mellencamp, a 2008 inductee to the Rock and Roll Hall of Fame, co-founded Farm Aid with Willie Nelson and Neil Young in 1985. The 66-year-old is a Grammy Award winner (1983 for “Hurts So Good”) and the recipient of the Billboard Century Award (2001), Huntington’s Disease Society of America’s Woody Guthrie Award (2003), Americana Music Association Lifetime Achievement for Songwriting (2010) and John Steinbeck Award (2012).